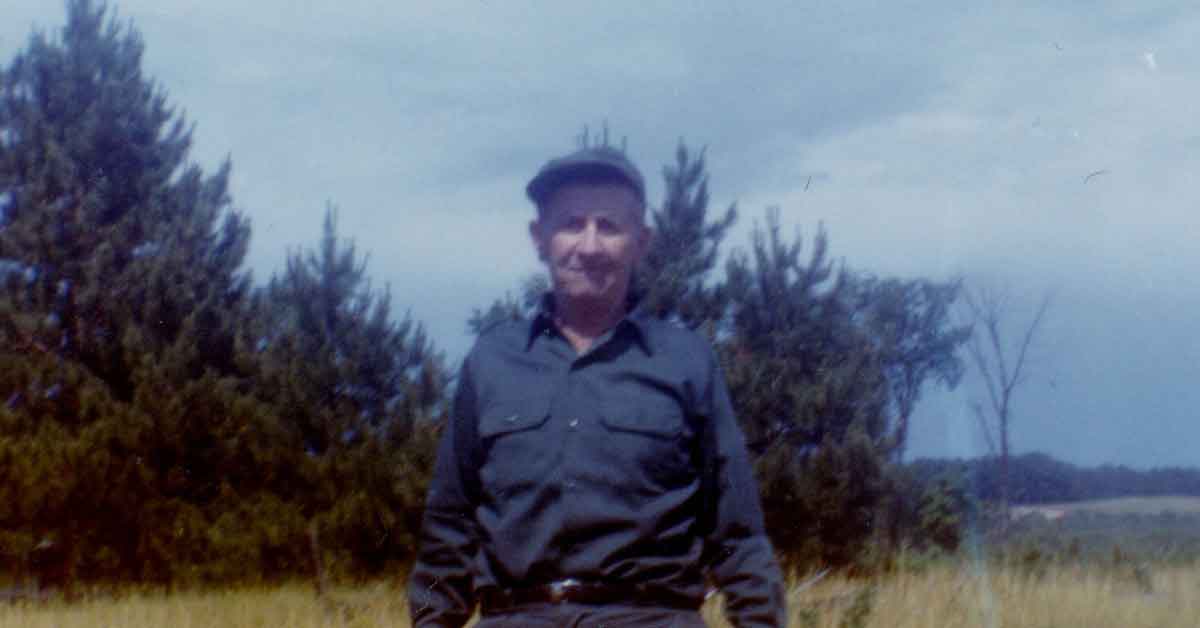 Who is Dan to you? The following is not a complete list of relatives/descendants, but if you recognize any of these names, it may help you answer that question.

When Dan was born, he already had three siblings:

Dan was nearly 7 when Lottie Mildred Arnold joined the family in October of 1897..

In May of 1910, Daniel, 18, was a farmer living with his sister, Lottie, and his parents in Platte township, Benzie County, Michigan. [1910-US-Census]

My mom and dad eloped to get married. My mom’s parents had someone picked out for mom but she wanted no part of it. My mom’s parents didn’t like or care for my dad and I don’t know all the reasons why. Some time in July however my mom and dad got together, eloped to Beulah (county seat) and were married by a justice of the peace. The transportation was by horse and buggy, a distance of about 15 miles. They stayed overnight before coming home to announce their marriage.

Children of Daniel and Tracie include:

On Monday, April 2, 1917, President Wilson went before a special joint session of Congress and asked for a declaration of war against Germany, saying “the world must be made safe for democracy”. Within four days, the United States Senate and House of Representatives passed war resolutions declaring war on Germany, and the U.S. joined the “Great War”. A month later, Congress reinstated the military draft for the first time since the Civil War. One month after that, in June of 1917, with Tracie six months pregnant with their first child, Dan registered for the draft, claiming exemption due to dependent relative (wife and mother), and was not drafted into service.

In spring of 1918, with son, Alvin, only six months old, the Spanish Flu pandemic had made its way to the United States. According to the CDC, the number of deaths from this flu was estimated to be at least 50 million worldwide with about 675,000 occurring in the United States. Sadly, Dan’s younger sister, Lottie was among the casualties, dying in October at the age of 21.

1917-1918 was one of the worst flu seasons ever. My mother tells of almost dying. My Aunt Lottie (father’s sister) died November 5th 1918. I always told my folks I could remember her, but now I don’t think so because I would only have been a little over one year old.

In February of 1919, Dan bought a cemetery plot at the Platte Township Cemetery. He had just lost his sister to the Spanish flu pandemic and his wife had just lost her mom to a fire a few months ago. Was any of this weighing on Dan’s mind when he bought this plot, or was it simple planning ahead? The cost of the plot, by the way, was a whopping $2. This is the equivalent of $5.60 when Dan died in 1974, and $30 in 2019 dollars, so quite a bargain.

In January of 1920, Daniel was a Farm Laborer on a home farm, living in Platte township, Benzie County, Michigan. [1920-US-Census]

At this time the forests in Michigan were being harvested for their lumber and my father worked in the cutting of the trees. There were no chain saws in those days and it was a lot of hard work. I remember in winter time, how my father spent the week in lumber camp and he would come home late Saturday, and on Sunday afternoon he would put on his snow shoes and go back to the lumber camp. At this time there were many farmers planting fruit trees – mainly cherry and apple trees. In the summer my father worked for some of these farmers. His father was a township road commissioner and he may have done some work for him also.

In June of 1922, almost a year after birth of son, Allen, Daniel lost his brother Bert in Wisconsin.

It was about this time that the lumber industry was winding down since most of the valuable trees had already been cut down and made into lumber.

My dad then went to work for the fruit farmers and we moved to one of their farms. Three brothers had come from California to Illinois and purchased this farm. Their names were Caviggiola, Pellezari, and Autinini. They had ten children between them so that helped our small school to have some one to play with. My dad became the working foreman at that time and spent many years there.

In January, of 1925, ten months before his son Alton was born, Dan’s mother, Hannah died.

Sometime in 1924 or 1925 we moved to what we call #2. It was a nice farmhouse and it was on one of the three farms owned by Caviggiola’s. This was our home until about 1934-1935. My dad was still the boss of the orchards. Dad raised his own pork and beef and we had our own chicken, garden, etc. on the side.

Daniel’s father, Daniel Webster Arnold, died on July 5th of 1928, a year before his final son, Laban, was born.

The country was in great depression at this time but being on the farm it didn’t bother us much as we had enough to eat. In the big cities there were soup lines and many people out of work with nothing in sight for them. My dad was still in charge (working foreman) so he made enough money to keep us going.

My mother had to make or bake all of our food. If we ever got a box of corn flakes that was a great treat.

On Saturday night when the folks would go to town for the week’s food, dad would usually get us a candy bar or ice cream cone. That was our treat for the week.

I do remember one thing that I enjoyed very much – my dad was an avid fisherman and hunter and he taught me at an early age. I remember him taking a neighbor and me by horse and buggy after work to the lake four miles away. We fished almost in the dark, and then came home to clean fish. We did eat a lot of fish and mom could fix them well and it sure helped out with the food bill.

In April of 1930, Daniel worked on a fruit farm and lived in Platte township, Benzie County, Michigan. [1930-US-Census]

Dan and Tracie’s son, Alton, succumbed to double pneumonia on July 11, 1934 after a month-long illness.

Dan and Tracie lived with or near her parents before moving into their own place on Fowler Road in 1936. [Photo of the homestead on which Tracie noted: “our place from 1936 to 1974”.] The “our place” they moved in to was Daniel Webster’s house on Fowler Road. We have little idea why they did not move into the house until eight years after Daniel Webster died.

Electricity wasn’t brought into the area until about 1938-1939 so especially in the wintertime we had to do all our outside chores by lantern light, which gave a little more light than a candle. It was a kerosene lantern. In the house we also had a couple of kerosene lamps. I know the meaning of “burning the midnight oil”.

In September of 1940, the United States instituted a peacetime draft, requiring registration of all men between the ages of 21 and 45. After Pearl Harbor, registration became mandatory for everyone between ages 18 and 64. So in 1942, Daniel once again found himself registering for the draft of a World War. And again, this time at age 51, he was not drafted into military service.

Dan was still employed by the WPA in 1942. [WW II Registration Card]

Dan lost his sister Lillian in April of 1946.

According to his 1971 Michigan Drivers License, Daniel was five feet, seven inches, weighed 155 pounds, and wore corrective lenses over his blue eyes when driving.

I remember staying with my Grandparents for a week in the summer of 1973 when I was 17. I joined them, Aunt Ellie, and Uncle Al for dinner in Traverse City to celebrate their anniversary.

My Grandpa was running a crew of Christmas tree trimmers while I was there, so I worked for him one day. That was hard work, swinging that machete all day, but the part I remember most was the cold water he delivered by tractor at break time. He said the water was so cold because it was from the north-west corner of the well!

Daniel passed away in his home in Platte township, Benzie county, MI, USA on Monday, February 18, 1974 as a result of a heart attack (acute ventricular arrest / acute myocardial infarction) at the age of 83.

From a local newspaper:

ARNOLD — Daniel S. Arnold, 83, of Platte Twp., Benzie County, passed away suddenly at home Monday morning Feb. 18. He was a lifetime resident of Benzie County, having been born in Blaine Twp. on Dec. 22, 1890, the son of Daniel W. and Hannah Arnold.

He is survived by his widow, Tracie; by three sons, Alvin of California, Allen of South Haven and Laban of Muskegon; and by nine grandchildren and three great-grandchildren.

From a local newspaper:

Daniel S. Arnold, 83, of Platte township, died suddenly at home Monday, February 18. He was a lifetime resident of Benzie county, born in Blaine township December 22, 1890, the son of Daniel and Hannah Arnold.

Funeral services were held on Wednesday, February 20, from Bennett Funeral Home in Benzonia with Rev. George Agin officiating. Interment was in the Platte township cemetery.

Surviving are his widow, Tracie; three sons, Alvin of California, Allen of South Haven and Laban of Muskegon; nine grandchildren and three great-grandchildren.

The homestead was soon sold and Tracie proceeded to take turns living with her sons: Alvin in California, Allen in South Haven, and Laban in Muskegon. 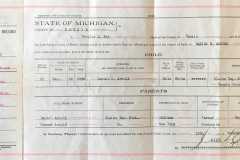 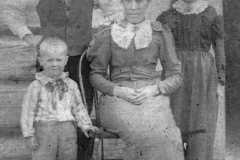 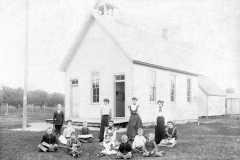 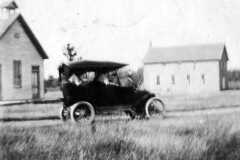 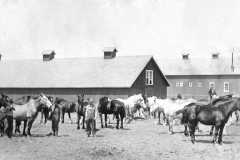