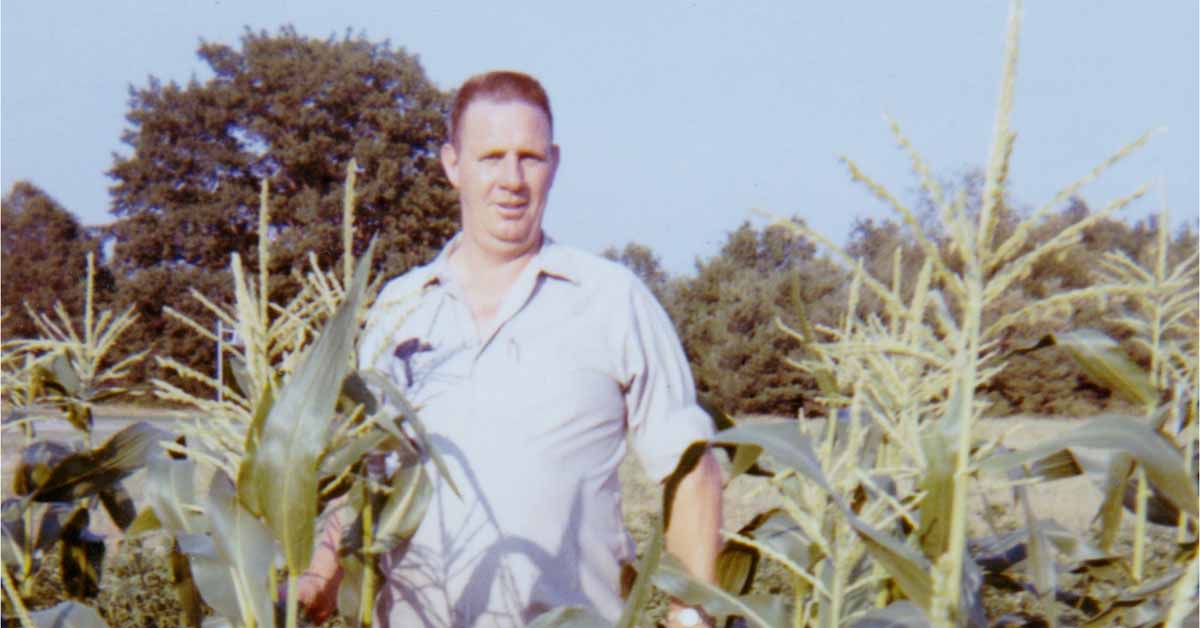 When Laban was born, he had three older brothers to greet him:

When Laban was not yet five years old, in July of 1934, his brother Alton Leonard Arnold died of pneumonia.

Going back a bit, I was sad when I heard that Allen had dropped out of school and further saddened [later] when Laban dropped out. I don’t think my parents knew the value of education so they were not encouraged to continue.

I felt bad because I had a hard time having to milk cows, etc., and walk to the bus and all they had to do was get up and meet the bus at the door. I probably wouldn’t have been able to change their minds even if I had been there.

[DEA: Laban later finished his G.E.D., and encouraged all his children to stay in school.]

There was times when Allen and I would be up home at the folks at deer hunting and other times. Laban was glad to see us and I know he was lonely. Allen and I would stretch out on a couch and try to get a little nap and Laban would get a feather and tickle us awake (he didn’t want us to sleep). Finally after a bit Allen and I would take him and tie up his hands and legs and then he would beg mom or Charlotte to let him loose. It was all in fun. He didn’t weigh 200 at that time.

[After Alvin’s return from the war] Laban was still with the folks at home. I didn’t think he had shown much interest in moving to the city but he was only about 17 at this time.

Laban had come down to Muskegon some time in 1949 and got a job. He didn’t stay with us but he spent a lot of time with us. I think he went back up home almost every weekend to see the folks. He came over and helped me with the basement and that was a big help. He ate a lot of meals at our place and he liked Charlotte’s cooking. I don’t think he thought too much of the food where he boarded. We had good times together.

I had bought an aluminum car top boat . . . Laban and I carried the boat and gear into the back way of Pearl Lake one day after we had drove as far as possible with the car. It got very heavy before we got there but we did get one nice pike and it made a meal for all of us.

In September of 1950, Laban registered for the draft and was found “not acceptable for induction at the present time”. [DEA: I remember being told the issue was flat feet.] The Certificate of [non]Acceptability was mailed to Route #1, Honor, Michigan [Fowler Road].

According to a newspaper clipping, Laban lived at 1691 Division Street in Muskegon when he applied for his marriage license.

Laban had married soon after we had moved away. Would like to have been at the wedding but it was impossible to get away. Laban married Doris Moore.

The newspaper clipping announcing their marriage listed their future residence as 1589 Park Street in Muskegon. That address is a vacant lot in 2021.

Children of Laban and Doris include:

Outside of family, Laban went by “Slim” most of his adult life.

Laban and Doris welcomed their first child in 1953 while living at 620 Marquette Avenue in Muskegon:

In 1956, their second child arrived while Laban was a mechanic at Pine Street Gulf, and lived at 620 Marquette Avenue in Muskegon:

In April of 1956, Laban and his brother Allen helped a woman from a burning building in Muskegon. From a local newspaper:

Fire, believed caused by defective wiring, did $3,500 damage last night to the building and contents of an apartment dwelling at 1092-94 First street. Muskegon Fire Department extinguished the blaze.

It is reported Mrs. Carpenter returned to the blazing dwelling to attempt to save some of her belongings and was brought to safety again before arrival of the firemen by Laban Arnold, 620 Marquette avenue, and Allen Arnold, 3287 Henry street, passing motorists.

The exact date is unclear, but pictures indicate that Laban had moved his family from 620 Marquette Avenue to 540 Leonard Avenue by Christmas of 1957.

Laban and Doris welcomed their third child in 1958 while living at 540 Leonard Avenue in Muskegon:

In September of 1958, according to a blood donor thank you note, we learn that Laban was blood type O Negative and confirm that he lived at 540 Leonard Avenue:

Dear Mr. Arnold, Your blood saved the life of baby Langler on Saturday , thank you so much for coming in to donate.

Note: The blood donor card and other mail actually say Leonard Street, but Google Maps shows it as Avenue (in 2021) so I’ll refer to it as 540 Leonard Avenue. DEA

Laban and Doris welcomed their fourth child in 1959 while still living at 540 Leonard Avenue in Muskegon:

Laban and Doris welcomed their fifth child in 1961 while still living at 540 Leonard Avenue in Muskegon:

Laban and family still lived at 540 Leonard Avenue on May 2, 1962, according to a letter addressed to Doris from Owosso College.

In May of 1963, Laban and his family moved into the house he and Doris built at 4086 Bexley Drive, between Muskegon and Fruitport.

I remember moving to Bexley in May of the year I was in fourth grade, and did not have to finish the school year. I don’t remember how they “evaluated” me, but they passed me through to fifth grade.

Laban enjoyed bowling and was a member of the championship team on the Northway National bowling league in 1962-1963.

I remember Mom would always kiss Dad goodbye in the back doorway and say get three 300’s.

Laban and Doris welcomed their sixth and final child in 1964 around a year after moving to 4086 Bexley in Muskegon:

On July 3, 1965, the day of his parent’s wedding anniversary, Laban was on a ladder trimming a tree using a chainsaw to improve reception of an antenna purchased as an anniversary gift for Dan and Tracie when a limb came at him and caused him to fall.

I remember (and can still picture in my mind) watching Dad fall from the tree. He was cutting a big branch that unfortunately came back toward him as it fell, knocking him off the ladder. He landed on his feet, then fell backwards just barely escaping his head hitting on the open tailgate of our station wagon.

As a result he suffered a severely shattered ankle. Laban was taken to Traverse City Osteopathic Hospital where he was admitted at 8:30 in the evening. During his two week stay, they diagnosed a comminuted fracture (kah-muh-NOOT-ed: when the bone breaks into three or more pieces) of his distal left tibia and a fractured left fibula, and performed a closed reduction, pinning and casting of the left tibia and fibula. Laban was on crutches for two years, and his ankle never fully recovered.

Prior to breaking his left ankle, Laban was enrolled with Industrial Training Institute of Chicago (ITI). We know nothing of this program other than a letter from ITI to Doris about his status after the accident. One possibility is this was a technical program pertaining to radio and television repair, as this seems to be something ITI was doing, at least in the 1950’s.

In December of 1965 we have a letter from Laban’s doctor saying that he will be on crutches for at least six more months.

Laban worked at Schamber Tractor Sales for 20 years, beginning probably in 1967 – the earliest related document we have is a pay stub from August of 1979.

Over the years, beginning in 1973, Laban shared in the joy of the marriage of each of his children:

In May of 1978, Laban completed “all the requirements prescribed by the [Michigan] State Board of Education under the General Education Development program” and was awarded a “High School Certificate”.

On June 11, 1980, lost his brother Allen Fredrick Arnold. [DEA: I can only imagine what a tremendous loss this was, as these brothers were best friends and spent as much time together as their busy schedules would allow.]

Laban passed away at Ferguson Hospital in Grand Rapids, Kent, MI, USA, at 10:30 p.m. on Monday, February 16, 1987, of cardiopulmonary arrest after a two-year battle with colon cancer. He was 57.

LABAN D. (SLIM) ARNOLD, 57, of Muskegon died Monday. He was the husband of Doris Arnold and had been employed at Schamber Tractor Sales for 20 years. Arrangements by Clock.

Also from the local newspaper:

Laban’s remains were cremated by Rosedale Memorial Park on February 17, 1987.

His six children gathered at the Platte Cemetery on September 1, 2002 for a graveside ceremony to honor him and Doris as they laid their cremains to rest. 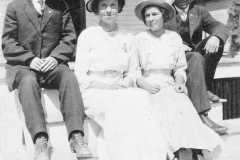 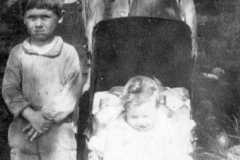 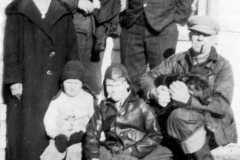