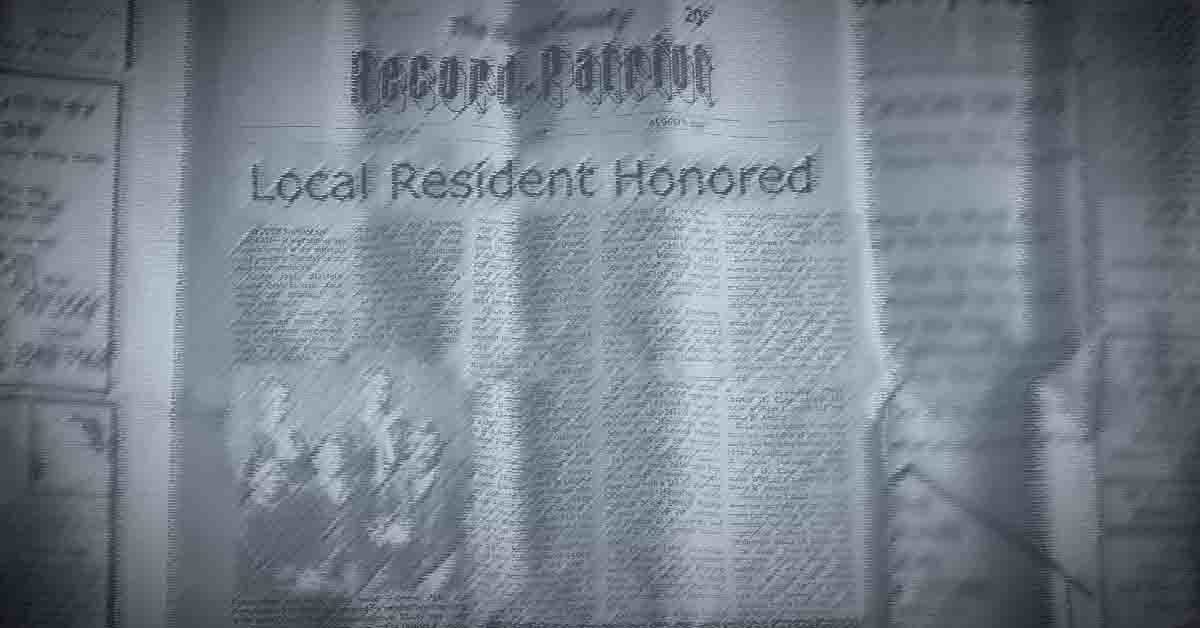 He was the husband of Phebe Parkhurst — married before/about 1640 in Watertown, Middlesex, Massachusetts, USA.

Thomas most likely came to America on the “Plain Joan” in May of 1635.

Thomas passed away in Woonsocket, Providence, Rhode Island, USA in September, 1674 around age of 69.

As you can see there are some things we do not know for certain about Thomas. Records from the day are scant and often ambiguous. Opinions are varied. Distractions and/or deceptions add to the intrigue. In the following sections we look in further detail at some key questions:

Who Were the Parents of Thomas and Is He of Royal Lineage?

Due to the publication of a false genealogy in 1870, there has long been confusion as to whether this Thomas was:

Read here for the details about these claims. Spoiler alert: Both are untrue.

Bottom line, even if our Thomas the immigrant of Watertown was a half-brother to immigrant William — and he was not — that does not make our Thomas a descendant of royalty because early accounts had William’s father wrong also.

If you read the details, you know that we have confidence that our immigrant, Thomas Arnold, was most likely the son of either:

Both had a son named Thomas and both appear to have been fine farm families!

What Year Was Thomas Born?

There are no known baptismal records to prove when Thomas was born. Indeed, other than emigration records, there is no official record of his birth. We are going to use 1605 as a birth year, based on those emigration records – see next section. 1605 also seems to fit with most estimates of his birth that are made based on the birth of his first child, Susanna.

It is important to note that he was not the Thomas Arnold baptized April 15, 1599, as is sometimes said.

When and How Did Thomas Come to America?

In his 1874 “Persons of Quality” book of English emigrants, John Hotten lists a 30 year old Thomas Arnold leaving London for Virginia onboard the Plain Joan on May 15, 1635:

In his 1860 “Genealogical Dictionary”, James Savage, writes that Thomas came to Watertown via Virginia after arriving there from London on the Plain Joan in May of 1635:

THOMAS Arnold, Watertown, arr. from Virginia, whither he came from London, May 1635, in the Plain Joan.

In his 1887 “Genealogical Dictionary”, John Austin, writes that Thomas came to Watertown soon after arriving in America on the Plain Joan in May of 1635:

Thomas Arnold came to America in ship ‘Plain Joan’, and soon settled at Watertown, Mass. May, 1635.

There is some disagreement on whether our Thomas is the Thomas who came to America at 30 on the Plain Joan. Edson Jones, for example, argues against it:

The present writer questions the statement that Thomas Arnold, 30, embarked for Virginia in the Plain Joan, in 1635. He died at Providence, R. I., in Sept. 1674, but at no time is his age of public record. His first child whose birth was recorded in America was Ichabod, who was born 1 Mar. 1640 (Watertown records); but the father had had an earlier child, Susanna, who married in Boston, 7 Apr 1654, John Farnum. If she were then twenty years old, she was born two years prior to her fathers recorded appearance in Watertown.

The above argument, centers around the birth of his daughter Susanna, which Jones implies would have been two years before the arrival of Thomas in Watertown. This assumes that Susanna was married at age 20, which was an average marriage age in the colonies in the 17th century, although the average was a few years higher in Europe. Her actual marriage date, however, is unknown. The argument also assumes that Susanna was born after Thomas arrived in America, which is not only unknown but disputed. In fact we have Susanna being born to the first wife of Thomas in 1629, making it quite possible/likely for her to have made the voyage with Thomas after her mother died.

In the 1870 “English Ancestry of the American family of Arnold”, Horatio Somersby says that Thomas of Watertown is supposed by multiple sources to be the Thomas Arnold, aged 30, who embarked May 15, 1635, in the Plain Joan for Virginia; but if so his age is not correctly given. However, that is only because Somersby incorrectly assumes he was born in 1599, based on an erroneous connection as a half-brother of William, which you can read more about here. In fact, the strongest evidence we have of when Thomas was born is the emigration records from the Plain Joan.

Richard Benson, in his 2009 “Arnold Family” book, says that some doubt that Thomas of Waterford came over on the Plain Joan at age 30, because there is no evidence other than matching names. That is possible, but we believe the timeline, names, places, and so on fit, and see nothing to disprove the assertion.

Some genealogists have suggested that Thomas was the Thomas Arnold, age 30, who sailed to Virginia in the Plain Joan on 15 May 1635. Several authorities have doubted this assertion, however, as there is no evidence other than matching names.

Who are Wives and Children and In-Laws of Thomas?

Thomas first married around 1624 in England. We have not found a credible record of her name, but some report it to be, without source documentation, Margurt/Margert — there may be some confusion here with a Margaret who was married to Thomas (not the immigrant), the half-brother of William the immigrant. We will leave the name of the first wife of Thomas as a mystery.

Children of Thomas and his first wife include:

Some list sons Thomas and Nicholas as issue of our Thomas and his unknown first wife – probably confusing, again, the sons of Thomas, the half-brother of William the immigrant.

Thomas married a second time some time before 1640 in Watertown, Middlesex, Massachusetts, USA. His bride was Phebe (Parkhurst) Cane, daughter of George and Susannah Parkhurst. Phebe Parkhurst had earlier married Daniel Cane in 1635 in England. There is no record of any children from her first marriage, and no record of the death of Daniel Cane.

Children of Thomas and Phebe include:

What Else Do We Know About the Life of Thomas?

Much information about Thomas is given in: Austin, John Osborne. Genealogical Dictionary of Rhode Island:

What Do We Know About the Death of Thomas?

Thomas passed away in Providence, Rhode Island, USA in September 1674 around the age of 69.

On June 29 1685, it was therefore agreed between his widow Phoebe, and Richard the eldest son, Thomas, John and Eleazer, also sons of deceased, and Elizabeth Comstock, his daughter, that there should be five instruments of covenant prepared and signed by all of them, Samuel Comstock, signing as husband of Elizabeth. “Whereas the said deceased, Thomas Arnold, did by word of mouth leave his mind with his wife and children how they should divide his estate of lands, goods and cattle amongst them after his decease; the aforementioned persons all and every of them, the same do hereby endeavor to propagate and perform to the best of their understanding and abilities, &c. To Phoebe, the widow, the lot bought of William Fenner, with orchard, and at her decease the same to revert to Thomas. To Phoebe also, land east of the Moshassuck River, said home lot at her decease going to son John. To Phoebe also, all household goods, two cows and nine swine at her own disposal. To Elizabeth Comstock, 20 pounds. To Thomas Arnold, a house lot in town, two other lots, a meadow, a tract of 50 acres, and rights of common. To John Arnold, 3 lots, an orchard, a piece of land of 17 1/2 acres, share of meadow, &c. To Eleazer Arnold, 50 acres near place called “World’s End”, a 15 acre lot, 3 shares of meadow, &c. To John and Eleazer, an equal share in certain land. To Thomas and John equally, the tackling and tools of deceased. To Richard, the eldest son, all the rest of lands. 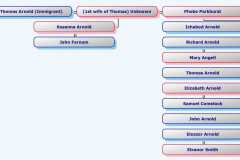 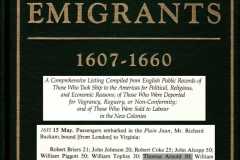 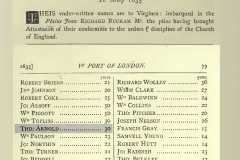 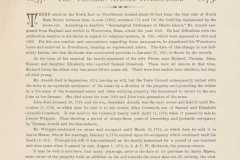 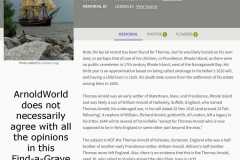 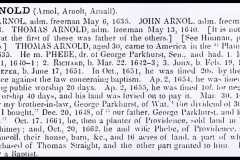 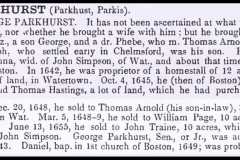