Who is Tracie to you?

It is reasonable to assume the “M” was from her mother Mary, or from her grandmother Johanne Marie, but neither can be proved at this time.

In the winter, several neighbors had fixed a cabin shelter on a large sleigh, about four feet wide by six feet long, to keep the cold weather out when they would drive to town. Some even had little stoves in them. You could compare them to a modern day fish shanty.

Children of Tracie and Daniel include:

On November 26, 1914, Tracie published a mock newspaper called the “Platte Gossiper”, which is included in the images below. Among other things, Tracie predicted her future marriage to Dan Arnold – 20 months in advance of it actually happening.

As I recall it was a severe winter and sometime in March or early April of 1934, I contracted pleural pneumonia and nearly lost my life. The great efforts of my mother and Grandmother Balitz were all that saved me.

In the early stages, they used poultices of cooked oatmeal and/or onions. I was in and out of consciousness and in severe pain with pleurisy. Then, my folks called in a doctor and I believe he didn’t have much more to offer than aspirin. I was flat on my back and very weak. Finally, this doctor called in another doctor (surgeon) and they decided they would have to drain fluid from my right lung. Dr. Covey was from Honor and the surgeon, a Dr. Thatcher or Thacker as I remember was from Frankfort. So they met at our house one morning to proceed with the operation.

My mother and grandmother held my hands and my dad held my feet, while the doctors made a slit between a couple of ribs and inserted drainage tubes to leave in place for a few days. This was done without the benefit of painkillers. I screamed but they didn’t stop. It hurt awfully, especially going into an infected area. They drained a lot of fluid and bandaged it to catch the fluid as it drained. The pain of the pleurisy remained but I did start to eat and gain a little strength back.

My grandmother, who lived about a half mile away, was at my side for a long time as my mother did the other work. Slowly, I was nursed back to health.

Then, sometime in June, brother Alton also got pneumonia similar to what I had. They did the poultice thing with him also, but didn’t operate to insert drainage tubes. He went through quite a long sick period and seemed to be improving.

I remember the morning he woke up out of a semi coma; he said, “I’m hungry and want something to eat”.

My mom fixed him something to eat and he ate a bit of food. Alton then lay back in bed and died. My dad was working in the field close by and they told me to get him, because my mother almost went out of control. I remember her taking it awfully hard. Only at this time could I know the feeling. Alton was just under eight years old. It was July 11, 1934 that he died.

Fortunately, Allen and Laban escaped getting serious ill with this pneumonia.

I soon bought my second car – a “Model A” Ford roadster with rumble seat . . . Going back a bit, I was doing some driving of my dad’s Model T before I reached 14 when my dad was along. The day that I was 14 my grandfather Balitz took me to Beulah (county seat) to get my driver’s license . . . From then on I usually drove mom into town for groceries and that saved my dad from going. My mother never did learn to drive and I don’t think she had any desire to do so.

[Probably late 1930’s] I think I got up to Honor about every third week. That’s when I would have a longer weekend. Depending on the particular season, mom, dad, Allen, Laban and I would go fishing or mushroom hunting or whatever seemed to be the best thing to do at the time. I usually tried to write mom a note if I thought I was going to come but sometimes I would go on the spur of the moment due to an extra day off. There were no phones up there so no way to relay a message. I was always welcome. I think Allen and Laban were anxious to see how I was making out in the city. Mom always had a feast ready.

In 1953 [Note difference in year from comment below] we had my mother fly out from Michigan and that proved to be quite a treat for her and our family also. In the following years she would make more trips after dad had died. She didn’t mind flying at all.

Some time in 1954, Tracie made a trip by air to visit Alvin and his family in California. From the local newspaper on her return:

Mrs. Dan Arnold of Honor recently returned from a four week vacation in California, a guest of her son and family, Mr. and Mrs. Alvin Arnold and three children.

Alvin, who graduated from the Honor high school in 1937, resided in Muskegon for several years and two years ago moved to 6570 Myrtle Street, North Long Beach, California.

Mrs. Arnold attended the ‘Queen For a Day’ television show in Hollywood and also visited points of interest at Lake Arrowhead, Pasadena and Laguna Beach.

The trip between Michigan and California was made by commercial airline.

According to her December 11, 1956 application for a Social Security Account Number, Tracie was employed by E. J. [Elsworth] Esch, and born in Honor, Benzie, Mich. 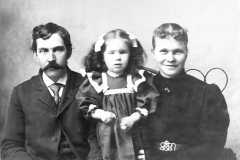 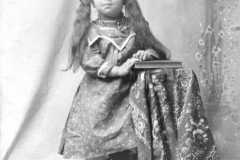 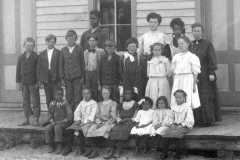